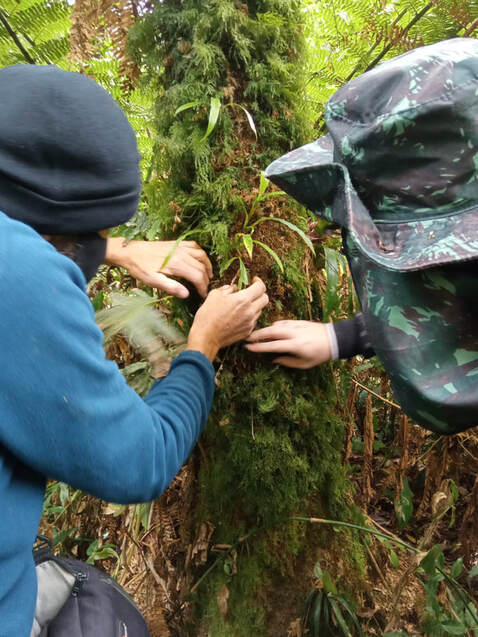 ​Approximately 6% of all orchid species occur in Brazil, of which 55% are endemic to the country and 1,500 are found in the Atlantic Forest. Orchids are one of the most vulnerable plant groups in the world, with the largest number of species on the International Union for Conservation of Nature's Red List, mainly due to the loss of their natural habitats and the need to establish specific biotic relationships with mycorrhizal fungi. Orchid mycorrhizal fungi are crucial for seed germination and seedling establishment because orchids produce tiny seeds with little or no nutrient reserve. Mycorrhizal fungi also improve adult orchids fitness to resist adverse environmental conditions, such as scarcity of nutrients, water and phytopathogens. Therefore, orchid mycorrhiza are key interactions for understanding orchid occurrence, geographical distribution and spatial occurrence of individuals and populations. Orchid-mycorrhizal fungi interactions are also important to plan orchid reintroductions (i.e., whether orchids can colonize new habitats and how their survival will be affected by future climate changes.

Previous studies for terrestrial orchids show specialized orchid species associated with more generalist mycorrhizal fungi, but data on epiphytic associations show interactions to be more conservative and may co-evolve more than terrestrial ones. Mycorrhizal communities are known to differ substantially from one site to the other and mycorrhizal specificity are known to vary between species. Available studies so far have focused on terrestrial species, which may result in biases in the number of fungi that orchids associate with and in the way orchid mycorrhizal networks are constructed. It is therefore essential to sample a representative number of epiphytes that grow in the same area and that are exposed to the same mycorrhizal pool so we can achieve a better understanding of how orchid communities are likely to respond to increasing human impacts, such as changes in land use or climate change.
​
​Goals:
To consolidate a research area in systematics, ecology and evolution of orchid mycorrhiza. We specifically propose to: (i) describe orchid mycorrhizal fungi associated with different epiphytic orchids from the Braziian AF; (ii) infer phylogenetic diversity of orchid-mycorrhizal interactions; (iii) establish an orchid mycorrhizal bank at Universidade Estadual de Campinas; (iv) expand the orchid seed bank of the State of São Paulo at UNOESTE (Millenium Seed Bank/ Orchid Seed Stores for Sustainable Use International Project/Millenium Seed Bank Partnership).